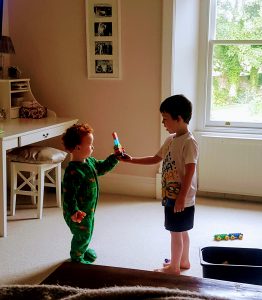 This photo was taken a few minutes after Storm Hugo-Finn, and there could have been quite a different outcome. Hugo (4) was saying to Finn (2) in the photo….”Here Finn, I have made this for you. You can play with this one while I make another for me”.

Three minutes prior,was quite a different story. Hugo was kicking Finn in bed whilst they were watching TV. They were fighting over who was to sit on my knee, and there was quite a bit of tension being displayed! I gave Hugo a look. You know the Mammy look – its not great. “But Mammy I need to get my anger out”. Cue joy in my heart. It’s starting to pay off. He displayed more emotional intelligence than I did with my look!

I acknowledged his feelings by narrating back to him “I can see you’re angry, its not ok to hit Finn (setting a limit). We need to think about something else you can do”. Hugo suggested hitting a cushion which he did. I explained that when my head gets full of anger sometimes it can be calmed by doing something with my hands, like making something or colouring”.

“Mammy, I know! I’ll get the lego and I can build Finn a car that he can keep in his bedroom and I can use different coloured bricks because he likes that”. He wanted to show his brother love and to play with him. He didn’t hit because he doesn’t like him or want to hurt him. He didn’t hit him because he’s a naughty boy. His emotions took over him. He’s 4.

Many times, this situation may have run something a little like this…Hugo kicks Finn, Finn gets upset, I tell Hugo to stop hitting Finn, Hugo gets more upset, I get cross and things escalate. Sound familiar? This way does not give Hugo a chance to calm and make things better. It doesn’t invite Hugo to come up with a plan or to show his loving side. It can make him feel bad and his behaviour will only reflect this further.

I can see from this morning that my aim of staying calm and acknowledging his emotion, and so giving him the words to name this feeling inside, is starting to pay off. He is beginning to use this as a strategy to help himself now. “I need to get my anger out”. He’s named the emotion. Simply by naming the emotion, a person can feel the level of fear and anger decrease. The upstairs, rational brain is calming the downstairs emotional brain.

It’s much easier just to react “Stop hitting”, and sometimes on those days when things seem relentless this will happen. To acknowledge, takes a calmness from us which can be difficult sometimes. However, in us acknowledging the underlying emotion (“I can see you’re angry”), rather than reacting to the behaviour (hitting/screaming/crying) gives a strategy for our children to use in the future to calm their own behaviour and be the loving person who they want to be.