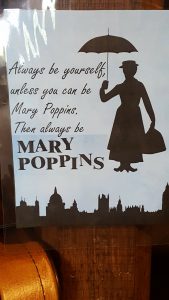 My heart has physically just felt like it had swollen. Like in a cartoon, where Popeye sees Olive Oil! I’ve just been in to see Hugo as he sleeps – his eye brows looking massive as the remnants of his “Ninja” face paint remains. He has shown me his little soul today…well actually, in truth, over the last 4 days but really all I’ve actually seen is the surface layer of “naughty” behaviour…spitting, hitting, angry faces at his brother, defiance. I tried over the last few days to manage these with respect but all I could really muster were apologies after I’d yelled and even showed him his angry face back at him.

But tonight, he showed his little soul. I’m not sure if the topic we were talking about when he absolutely broke down was what he was worrying about all week or whether, which is probably more likely for a just turned 4 year old, this was just a vehicle for an outlet. So I happened to mention that when I am “Mary Poppins” for 2 days this weekend at a local family day, we will be doing certain games…What’s the time Mr Wolf and Duck duck goose 🙂

Through tears and real emotion:

“I want to stay with you all day”

“Mammy, when you read that story I want to be on your knee the whole time”

“Mammy, I don’t want you to be Mary Poppins to them other children”

I’m not sure I responded so well to his cries…I did start off by trying to reassure him but this felt like I may be stifling his out-pouring. I told him things that I wasn’t sure would be true on the day…”yes you can help me with the games”…so this didnt feel that great. I tried explaining I would be a bit like the lady we saw on the stilts that time at Bowes Museum…well I’m not sure what image he has now. He threw toys at me at the end, saying it was because I was going to be Mary….hmmmm tough enough to stay calm. I told him I can accept any feelings but I can’t accept him hurting me, and moved away. He ran and sat on my knee.

But I did hold him, and look in his eyes and he knew I was really listening. At the end I said thank you to him for telling me how he was feeling. He asked me to cuddle him really tight for a long long time.

Who knows how it will go when I’m knocking out supercalifragilisticexpialidocious on Sunday, with hundreds of other children wanting my attention and my little boy with his heart on his sleeve seeing all this.

I do believe it’s not my job to protect from situations that I know he will find tricky but to acknowledge his feelings, prepare him and help him through it as much as I can.  I’m confused as to how to do this just yet. But I know one thing I am so very grateful that he gave me his little soul tonight and I was able to accept it. Let’s keep going kidda, we’ve got this.